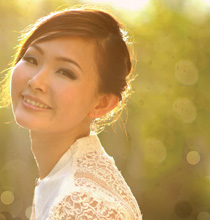 Renown Malaysian artiste. She was the first Chinese singer representing Malaysia to perfrom in Jazz Festivals and Hi-fi showcase across Asia, the Champion of Astro Talent Quest in year 2000, and the third winner of the World Chinese Singing Contest.

Winnie Ho was a vocal coach for the top 20 finalists for Astro Star Quest 2007 and collaborated with Roger Wang, to produce the audiophile album “2V1G” and “2V1G. Vol 2”.

Her solo album “The Jazzy Sound of Teresa Teng” was released in 2012 that hit sales of 3,000 copies within the first week.

Recently, Winnie continues her musical journey and is performing at the prestigious Esplanade Recital Studio Singapore to a fully sold out showcase.