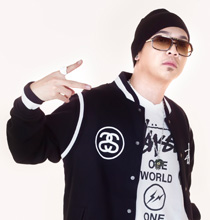 MC Bee is one of the members of ManhandD, his style is freestyle Rap genre. He is a Lyricist, Freestyle rapper, composer and songwriter.
ManhanD comprises of Five multi-talented individuals. They are MC Bee, MC Toy, Von, Daeren and DJ Point.

They are considered to be Malaysia’s first Chinese Hip-Hop and Rap Group. They gained popularity through the local Hip-Hop underground movement and have performed in many venues nationwide.

To date they have released five albums and their latest is entitled ‘Life goes On and On’. ManhanD has been invited to many local performances and events. They have also been invited as guest performers in Hong Kong and China.