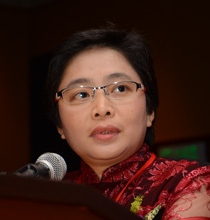 Lim Gaik Siang is an enthusiastic promoter of cultural heritage and Chinese culture. Since 2000, she has been involved in George Town World Heritage listing application as an Application Committee member assisting in compiling of the nomination dossier and preparation of evaluation by Icomos assessor in 2007.

In 2003-2005, she was appointed as honorary conservation consultant by Penang Teochew Asoociation and spearheaded physical restoration and conservation of intangible heritage of the Han Jiang Ancestral Temple of Penang Teochew Asosication, She submitted dossier of the above project, which was, accredited Unesco Asia-Pacific Awards for Culture Heritage Conservation in 2006.

In 2010, she held the position of Conservation Consultant for restoration of Sun Yet Sen Penang Base at 120, Armenian Street and Yi Oi tong project at 81-83, Penang Street.