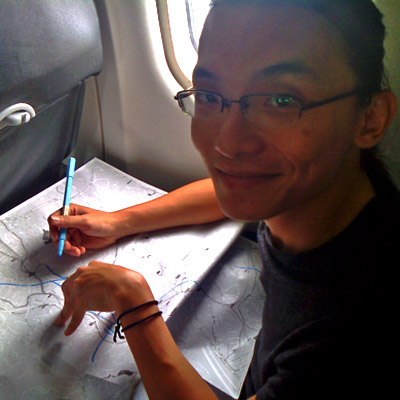 Born 1978 in KL. Currently the principal designer of studio 25, based in Kuala Lumpur, Malaysia. Practising design, photography, cycling advocacy & other social art projects. Communication designer Jeffrey Lim’s journey in formulating his creative direction originates from the spokes of wheels from bicycles. They are forms in which his designs, photographies and art projects take inspiration from; from techniques involved in making new concept bicycles, to recycling used parts in bicycles into new products; from the art of photography to the physical transformation of cameras from bygone eras to the present, Jeffrey is at the forefront of recycling materials from objects of passion. An avid commercial photographer, his photos have provided basis for making his communication design work more documentary, laced with stories within. From 2004 to 2012, travelling from Southeast asia to Europe, he has photographed almost everything culturally significant, making his works a historical visual documentation of items of historical value. Another, Jeffrey Lim’s single art project involving encouraging social communities to cycle — attempting to rediscover the most basic of human transportation — is testament of his determination in bringing the simple and yet multifaceted activity back in the human consciousness, as a form of transporation, a form of leisure, a form of sporting activity. He is attempting to create city Kuala Lumpur’s very first cycling map, debunking the idea that cycling is not possible along the city’s roads.

One pedal at a time. Taking up one challenge at a time, learning the transition, it is a journey to a destination that is perpetually changing.

I would start with myself. The secret to change is positivity, overcoming my perception of fear of the known or the unknown. As for the world, a little positivity could go a long way.